Scientists from the Charles Darwin Research Station (CDRS) and the National Geographic Society published a study in May, 2016 that detailed their findings regarding Galapagos Island Sharks—largely their discovery that the northern Galapagos Islands of Wolf and Darwin are home to the world’s largest shark biomass.

So not only are tons of sharks prowling the Galapagos Islands, but their presence as leading predators indicates a healthy marine ecosystem despite the depletion of reef fish in the area.

The findings of this two-year study helped lead to Ecuador’s creation of a new marine sanctuary surrounding Wolf and Darwin as well as comprehensive measures in their marine protection programs.

Almost 30 species of sharks haunt the waters of the Galapagos Islands, with some of the most prominent names being scalloped hammerheads, whale sharks, horn sharks, whitetip and blacktip reef sharks, tiger sharks, Port Jackson sharks, and Galapagos sharks. 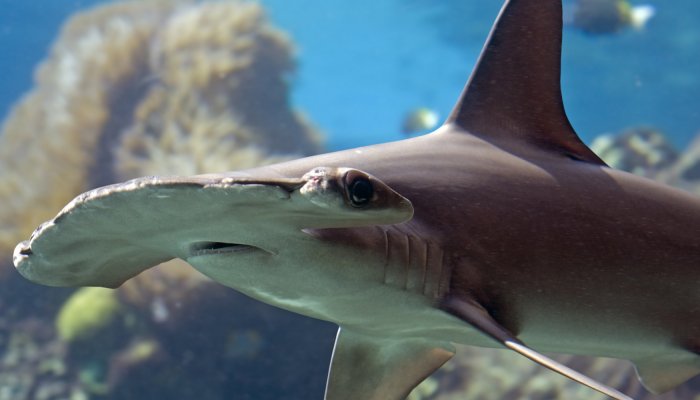 Scalloped hammerhead sharks are the most common hammerhead species to be found along coastal regions, and they occasionally find their way to shallow inlets and estuaries. They enjoy cruising along walls, rocky underwater banks, and rough coral reefs.

With their conspicuous “hammer” head, scalloped hammerhead sharks are easy to identify and made more so by the scalloped front edge of their head. They are slim and grey-bronze in color, weigh about 80-100kg, and grow up to 2.5-3 meters.

Where to find scalloped hammerhead sharks: 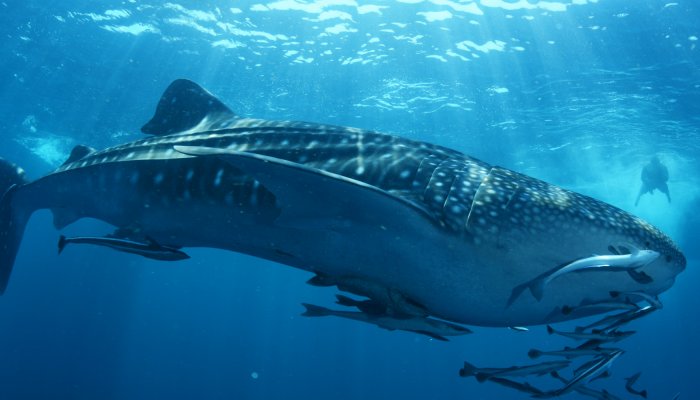 There’s that saying, “there’s always a bigger fish.” It doesn’t apply to whale sharks, the biggest known fish in the sea. They are giants that can reach up to 40ft in length, at least that we know of. So basically whale sharks are like a school bus that casually swims throughout the ocean.

Fortunately for us and other fishes below the sea, whale sharks feed largely on plankton. They just open their gaping jaws and taken in whatever lies in their path to filter and feed. Their cross-flow filtration technique is similar to that used by baleen whales.

If the massive size of whale sharks doesn’t tip you off, you’ll recognize them by the white spots and randomly placed, pale vertical and horizontal stripes that splatter across their black and grey bodies.

Where to find whale sharks:

Whale sharks most likely take up a decent chunk of the impressive shark biomass surrounding Wolf and Darwin Islands as these two islands are their favorite hangouts in the Galapagos. Many whale sharks return to Darwin Island routinely in their migrations, though they are a rarer shark sighting than others. 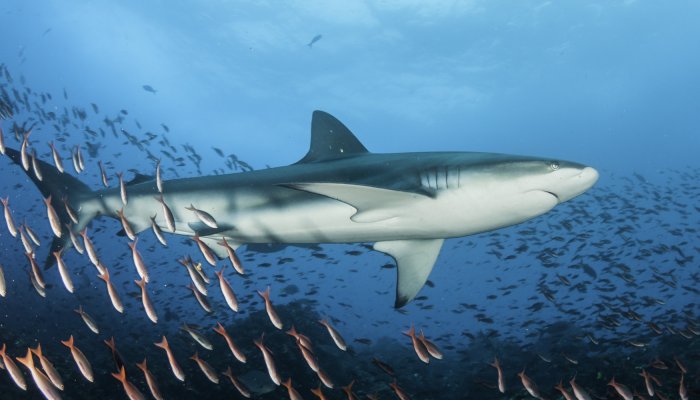 Galapagos sharks, otherwise known as grey reef whalers, prefer waters around oceanic islands and are primarily concentrated around the Galapagos Islands. They can be difficult to identify when seen alongside other sharks with their grey bodies, rounded snouts, and lack of conspicuous markings.

Though they can cross large distances across the ocean, they are most often found in clear water habitats with rocky bottoms and coral reefs—their primary feeding grounds. Though they are bottom feeders, they are known to occasionally feast on sea lions and marine iguanas in the Galapagos Islands.

Where to find Galapagos sharks: 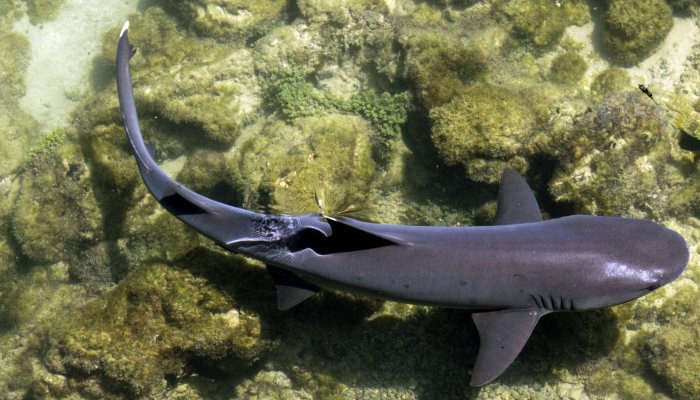 Whitetip reef sharks are a common sight throughout the Galapagos archipelago. Silvery-grey in color and topped with a pointed nose, the whitetip reef shark looks much like other sharks except for its defining white tips that mark its first dorsal fin and tail.

Where to find Galapagos reef sharks:

Whitetip reef sharks are most commonly seen when snorkeling at Española’s Gardner Bay and Turtle Island, Floreana’s Punta Cormorant, Bartolomé, and North Seymour. They prefer coral reef habitats, particularly along the ledges and coral heads. Occasionally, though, they can be spotted in lagoons, by sandy flats, and cruising alongside deep ocean drop-offs. Kayak among the whitetip reef sharks on our Galápagos Island Explorer tour.