These Ecuadorian marine mammals deserve their own section largely because when people think of Ecuador’s marine animals, they truly think of the Galápagos Island’s marine animals. With the Galápagos Island’s sea lions, penguins, and fur seals—to name a few of the incredible marine life found throughout the islands—it isn’t really surprising that mainland Ecuador’s own nautical animals get less attention.

That being said, the Amazon basin makes for a harsh habitat where it is often survival of the fittest. With its murky waters filled with predators, tricky environmental fluctuations such as flooding and drought, and complex arterial river systems difficult to navigate, the Amazon basin fosters impressive marine life that are not only physically impressive but show impressive evolutionary traits. While they may not be cute and cuddly fur seals, the Amazon River Dolphin, Giant Otter, and Amazon Manatee are stunning in their own right. 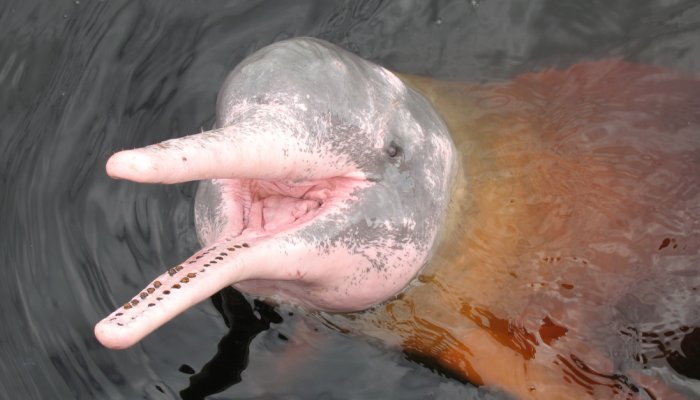 The Amazon River Dolphin, also commonly known as the pink river dolphin as well as boto, are similar to the Amazonian manatee in that they only inhabit freshwater—a constraint only two other dolphin species have. They can be found throughout the Orinoco and Amazon river basins stretching into Brazil, Colombia, Bolivia, Guyana, Peru, Venezuela, and Ecuador. Unlike the manatee, however, these animals have relatively abundant populations despite the threats to communities inhabiting certain environments.

The boto reach up to 2-3 meters, averaging around 6.5 feet, and weigh as much as 300 pounds. This makes them the largest of the freshwater dolphins. The boto come in, not surprisingly, varying shades of pink. They can range from rosy-pink to gray-pink, and some can even be an albino white if their pigmentation is bleached. A long, thin snout stands out against their short, round heads marked by a dominant forehead.

The prominent forehead does not actually house their brain. Rather, the forehead serves as a biological lens to focus their echolocation. With their incredibly small eyes, the dolphins rely on sonar rather than sight—another evolutionary trait that allows them to navigate the Amazon’s murky waters easily. This serves them well as the Amazon Basin continues to grow more polluted.

The dolphin’s unique pink color is impacted by their exposure to the sun. Dolphins who inhabit murkier water have a brighter pink hue and can actually ‘blush’ a more vivid pink when excited.

Boto who inhabit more clear waters tend to have a lighter pigmentation due to the exposure to the sun.

The boto also has the singular ability to turn their head from one side to the other. This is an evolutionary trait that helps them survive in the Amazonian river system. When the river floods, they are able to use the ability to turn their heads as well as their ability to paddle forward with one fin while paddling backward with the other to navigate through trees and other obstacles. Truly, the boto have adapted incredibly well to their environment. They also have free- floating vertebrae that allows them to perform 180 degree turns with ease. 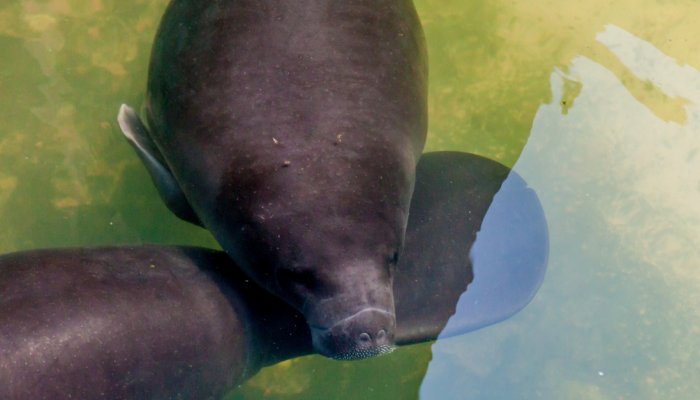 The Amazonian manatee can weigh up to half a ton and reach around 2.8 meters in length, making it the smallest of its manatee family. They are also one of the Amazon’s more visually bizarre animals with their large, paddle-like forelimbs. Their rounded snout brings to mind the face of a hippo whereas the flat, horizontal paddle that takes the place of their hind-limbs brings to mind the body of a seal.

These manatees are also friendly feeders who munch on hyacinth and water lettuce. Although they probably find their meals to be tasty, their diet must not be filling as they eat up to 8% of their body weight throughout a single day. Of course, they gorge themselves during the Amazonian wet season when the vegetation is fresh and boundless in order to store the nutrients within their fat reserves. These fat reserves sustain the manatees until the wet season returns and they can once again find food.

The Amazon manatee is one of three remaining species of manatee found throughout the world today. There is also the West Indian manatee (also known as the American manatee) and the West African manatee. They are the only manatee to be only found in bodies of fresh water. 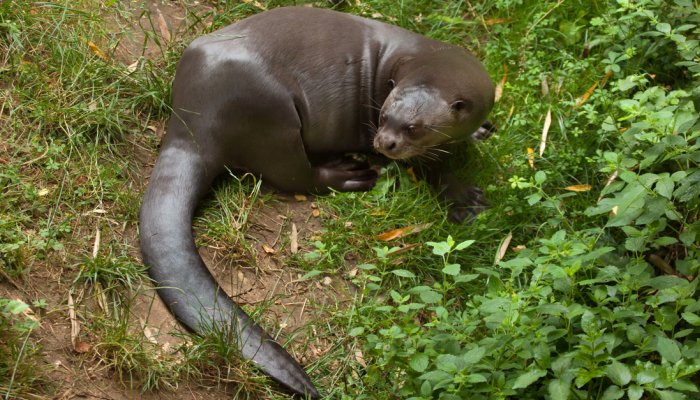 Weighing about 75 pounds and reaching around 6 feet, the South American otter stands as the world’s largest otter. In honor of their intimidating size, the South American otter is frequently referred to as the giant river otter. With their sleek fur and webbed feet, they look much like their smaller otter counterparts. However, these carnivorous animals could have been the inspiration for the R.O.U.S.’s made infamous by The Princess Bride and aren’t known for holding hands as they float along. Much like the Amazon jungle they inhabit, these giant river otters can be exotic and arresting…yet somewhat chilling.

This river otter species has a more localized habitat than its genetic friends, and you will only find them in the rivers and creek systems of the La Plata, Orinoco, and Amazon river systems. They are aggressive defenders of their home territory which often consists of dens burrowed into river banks or the debris of fallen trees, and so if you spot them its best to give them a wide berth.

They spend much of their time away from home, however, as they hunt for food throughout the day. They primarily eat fish, although that diet can be supplemented by other river creatures such as snakes. To sustain their rather significant weight, they eat hefty meals; they usually eat 6-9 pounds of food per day. In order to support such a diet, they occasionally hunt in groups with coordinated, strategic attacks in order to meet their daily intake.

The giant otters live up to their local moniker of “river wolves” as they are talented predators. Although they often eat fish and crabs, they have been seen killing and eating anacondas as well as caimans. One report has a family of giant otters taking down and eating a five-foot caiman in 45 minutes—an impressive feat for these clever creatures.