Approximately 360 species of mammals live within Ecuador’s borders. With 130 species, bats take up a good percentage of the mammal pie chart. Of the approximated 360 mammal species, there are almost 20 documented primates and 30 endemic mammals. These numbers are astoundingly high considering the Ecuador’s relatively small size.

Overall, Ecuador has the highest number of species per square area in the world, and it is 9th in the world for species found within a single country. Most of these mammals live in the tropical regions that are more nutrient rich and grow scarcer toward the higher elevations of the Andes. 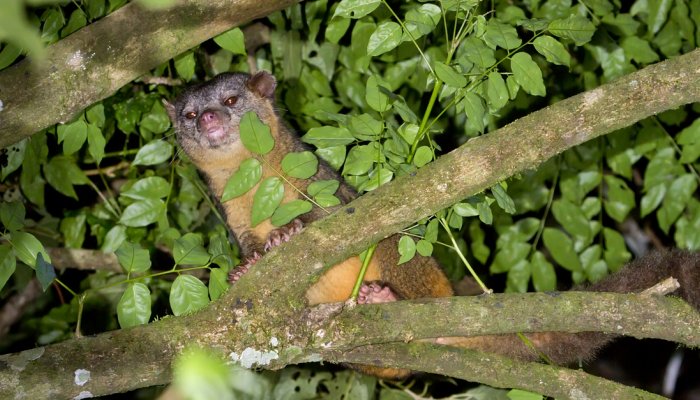 A victim of mistaken identity. Sequestered from science for hundreds of years. Shrouded in mystery and the fogs of the cloud forests. The olinguito may not be new to the world, but it is relatively new to science with its ‘discovery’ first announced to the world in 2013. The olinguito remains the first carnivorous species to be found on the American continents in over 35 years and stands as a reminder that the natural world has its mysteries and that space is not truly the last frontier.

The olinguito resembles a furry stuffed teddy bear mixed with a house cat with its fuzzy, endearing features. It shares its genetic family with raccoons, olingos, kinkajous, and coatis, and such resemblances within the family might have caused its misclassification throughout much of its history. The diminutive creature reaches only two pounds, has a body of around 14 inches long with a tail that’s as long or longer, and is covered in a thick orange and brown fur. The olinguito inhabits the cloud forests of Ecuador and Colombia, and its preferred habitat up in the trees complements its obscured past. Its habitat also led to its scientific name, neblina, which means “fog” in Spanish.

Although scientists are working to discover more about this elusive creature, they have discovered that the olinguito’s diet consists mainly of fruit supplements with insects and nectar. In their Andean mountain habitat, they largely stick to the forest canopy as they jump from tree to tree. Their nocturnal and solitary nature makes them even more elusive to the casual traveler through the cloud forest.

The olinguito has been in the public eye for over 100 years, even though its individuality was overlooked. Specimens could be found in museums in the early 20th century, and some were even put into zoos and displayed to the American public in the 1960s and 1970s. They were almost discovered several times. A zoologist claimed that the olinguito specimen he saw in a museum in 1920 had the potential to be a new species, but the hypothesis was never fully researched or reached publication. 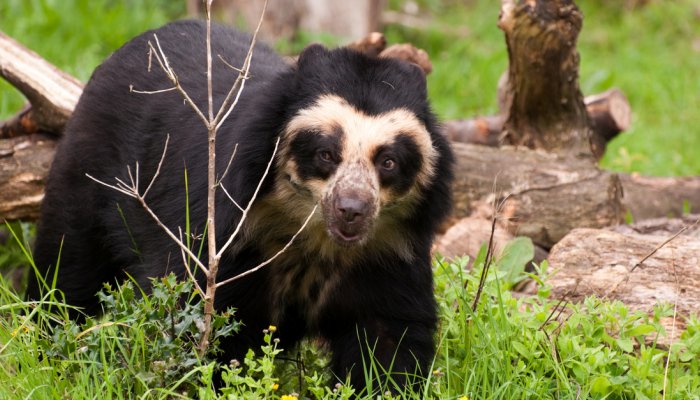 South America can only claim one bear species: the spectacled bear. As such, it has a fair amount of fame and has become a representative species of the tropical Andes. White and pale yellow markings occur around their neck, muzzle, chest, and eyes, offsetting their black fur. The light fur circling their eyes, producing the look of wearing eyeglasses, give them their common name. That being said, not all spectacled bears are bespectacled like this, so being the only bear species in South America makes them more easily identifiable despite their variations in coloring.

These bears have an omnivorous diet comprised of birds, rodents, and insects supplemented with the fruit and greenery of several different plants. They enjoy palms, orchid bulbs, bromeliad hearts, and occasionally tree bark. Ultimately, though meat only makes up around 5% of its diet, these Andean bears are South America’s largest land carnivores.

Unlike many other bears, the spectacled bear does not hibernate and you won’t find it inhabiting dark caves. Rather, they make platforms and nests out of branches and leaves within the Andean trees where the sleep and feed. They have been known to keep to their isolated, protected platforms for days as they wait for their fruit to ripen.

Although they have a pretty varied diet, habitat fragmentation and degradation are threats to the bear’s habitats and food sources. They also still suffer from hunting—from both the local populations as well as commercial ventures. Now, the spectacled bear is another of Ecuador’s endangered animals.

Spectacled bears have a pop culture following with their celebrity, Paddington, who is featured in children’s books as well as a recent movie. Paddington is actually from “deepest, darkest Peru,” not Ecuador, but he does sport some very modish spectacles that further reify his distinctive heritage. 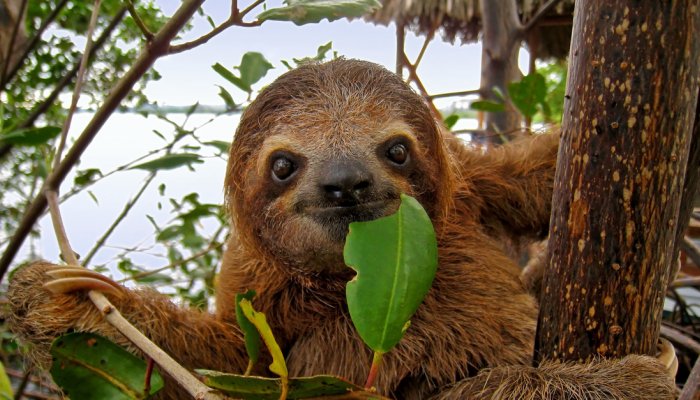 These creatures are so distinctive that they were named after a noun because a 17th century Portuguese man saw the creature as the embodiment of laziness. This nomination might be unfair. While sloths are the slowest creatures in the world and are so sedentary that they attract algae, it’s just who they are rather than a choice deserving the 5th circle of Dante’s hell. Although they are often motionless, they are built for life in the trees and are able to cling to a branch for hours, even while sleeping or after death.

The three-toed sloth is, not surprisingly, known for the distinguishing 3-4 inch claws that protrude from each foot. Smaller than the two-toed sloth, the three-toed sloth is an herbivore whose diet consists largely of tough leaves found in the treetops. Their four-part stomach allows them to slowly digest this difficult, non-nutritious diet. They can take up to one month to digest one meal, and the light diet does not produce much nutrition to sustain energy.

With how slowly sloths move, it’s difficult to imagine them making an impetuous motion that quickly turns disastrous. However, sloths are known to mistakenly grab their own arm instead of a tree branch and fall from their lofty perches. Occasionally, this can result in injury or death if they fall to the ground, but they also often fall into the rivers below. Luckily, sloths are strong swimmers—an unexpected skill as they are clumsy and weak on land. If sloths fall into the river, they can efficiently paddle their way out and back to the trees.

Scientists believe that sloths used to be much bigger—growing to be as large as an elephant. One has to wonder if they shared the same slow movement as their modern-day counterparts or if with their size came impressive speed. If they retained their meandering lifestyle, their ultimate extinction does not come as a shock. Scientists believe that these gargantuan creatures became extinct around 10,000 years ago and no longer roamed their North American habitat. 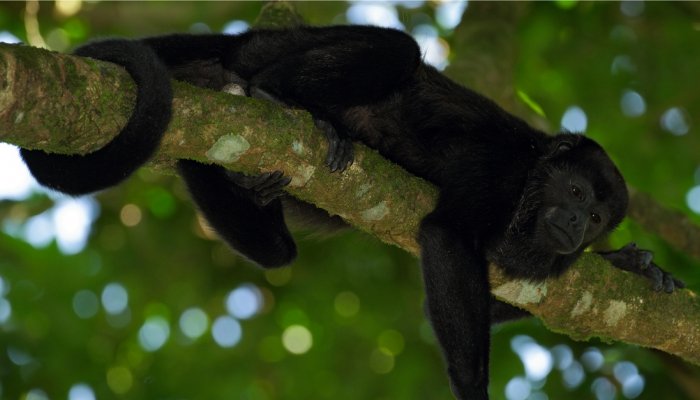 Although these howlers aren’t J.K. Rowling’s imagined screaming letters from Harry Potter, they are similar in that they both have powerful cries you don’t necessarily want aimed your way. These howlers gather for a distinctive concert, and their serenade can be heard for over three miles at dawn or dusk. As such, these mantled howler monkeys are aptly named for their haunting, cacophonous calls. The male howlers in particular have shell-like vocal chambers uniquely tuned to their striking call, and they use their musical production to send the much more mundane message that the territory has been occupied.

Not only do howlers have the greatest vocal cords of the South American monkeys, but they are also the biggest coming in at 15-22 pounds and reaching 22-36 inches when measured head to body. Their strong, prehensile tail measures the same length as their body, and it serves as a tool to grip objects or support their body as they hang from the trees. Their tail may be their greatest adaptive feature as they rarely leave their leafy perches for the jungle ground beneath. Of course one must also mention the guard hairs that line their flanks as well as their impressive beards that not only give them a distinguished look but the descriptor “mantled.” 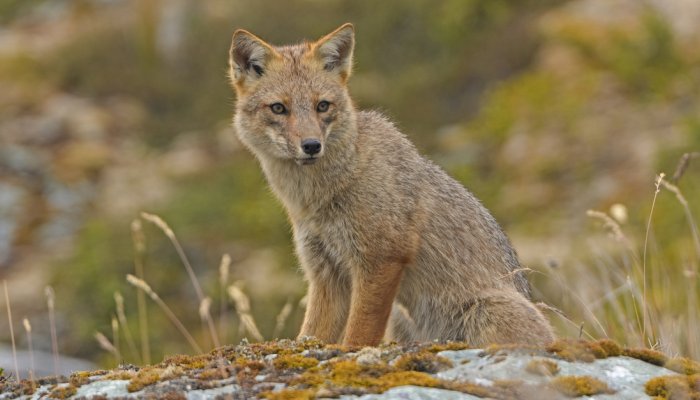 The culpeo fox, also known as the Andean Fox or the Culpeo Zorro, is South America’s largest fox with a body ranging from 23.5-47 inches and a weight of 11-30 pounds. Easily camouflaged with their grey fur backs and reddish-brown coloring covering the rest of their body except their black-tipped tail, culpeo foxes are natural predators of rabbits, armadillos, domestic livestock, lizards, birds, insects, and more; however, they are also opportunistic and also feed on eggs, fruit, and carrion.

The culpeo population extends along the the range of South America into Ecuador, Peru, Argentina, Bolivia, and Chile. In particular, they prefer the western grasslands and deciduous forests of the Andean mountain range. You can largely determine their average size by their habitat. In the northernmost regions of their habitat range, the culpeo tend to be smaller and can be compared to a beagle in size. Toward the southern regions, where the climate is harsher and colder—and filled with more predators such as pumas—the culpeo have evolved into larger creatures to combat these natural challenges. 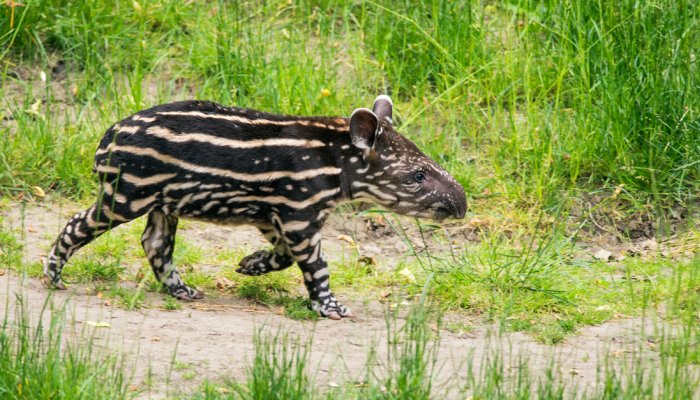 The strange-looking Brazilian tapir is actually a relative of the rhinoceros though they lack the horns and thick skin. In fact, their long snout gives them the look of an anteater more than a rhinoceros, and their dark brown coats further dispel the association.

The Brazilian tapirs are cautious creatures who prefer to be near the water so they can take a plunge at any threats. They are excellent swimmers and relatively quick on muddy shores due to their feet with widely splayed toes, two skillsets they often use for their getaways. They also are active largely at night, when they forage for food, and rest among the forest’s thick, shady vegetation during the day. At night, their long, mobile snout allows them to forage for leaves, shoots, buds, and small branches from a variety of trees, grasses, aquatic plants, and fruit.

Baby Brazilian tapirs have white spots and stripes to help them blend in with their environment, a coloring that much resembles fawns. 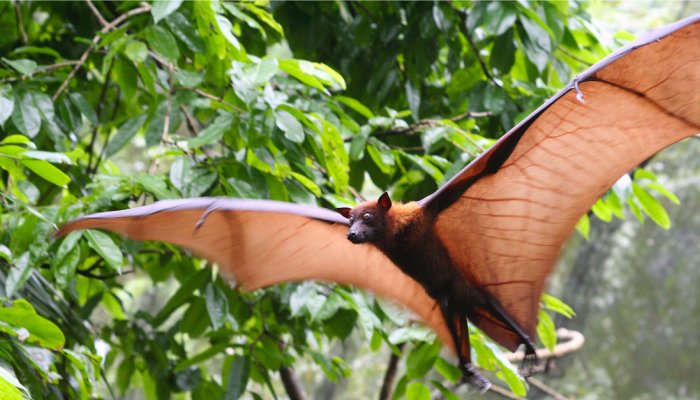 Although in no way does Ecuador include most of the Amazon basin, the hectares of rainforest it does include contain more than 100 species of bats. This makes this small region the home of the highest number of bat species found in a single habitat. With 173 different bat species identified throughout the entire country, Ecuador accounts for over 12% of the world’s known bat species. Despite their part in Ecuador’s significant biodiversity, they receive little recognition.

Perhaps the most widely recognized bats in Ecuador are the vampire bats. There are three vampire bat species found within the country: the common vampire bat (perhaps the most auspicious), the white-winged vampire bat, and the harry-legged vampire bat. Their sharp teeth and tendency to suck on other mammal’s blood have given the fearsome creatures of the night their reputation. However, in Ecuador they are considered pests of little conservation value. However, the Chocó broad-nosed bat, Ecuadorian sac-winged bat, Equatorial Dog-faced bat, and many more are endangered creatures within Ecuador’s otherwise megadiverse environment.

Bats play an important role in the jungle’s ecosystem as pollinators and seed dispersers. However, the oil prospecting, increasing industrialization, and logging of the region has led to habitat degradation. This habitat fragmentation can have harsh consequences on the tropical bat species found there, which can in turn influence the rest of the environment’s productivity.