VOLCANIC ISLANDS ON THE MOVE AND STILL IN THE MAKING

Though Simon & Garfunkel might have expressed their separation and independence from others by proclaiming, “I am a rock/I am an island,” this axiom doesn’t stand true for the Galápagos Islands.

True: the Galápagos islands are volcanic rock, and they are islands. But their current—and continued—existence is fully reliant on perpetually moving tectonic plates and repeated volcanic action at the earth’s mantle. The Galápagos Islands may have never been part part of the South American continent, but they are by no means untouched by the same geologic forces.

The Nazca plate moves at a rate of 6-8 cm per year—a rather significant shift over the course of time. In effect, the Nazca plate’s tectonic shift played a significant role in the swiftly (in geologic terms) growing Andes mountain chain as well as the volcanic islands that make up the Galápagos archipelago.

Volcanic hotspots—exceptionally hot, stationary places within the earth’s mantle—occur throughout the world and produce island volcanoes within a plate’s interior rather than near plate boundaries. The Hawaiian Islands are an example of hotspot-produced island volcanoes, and the Galápagos Islands are another.

Hotspots exist below plats and produce thermal plumes—sustained, localized sources of heat—which then produce magma, which rises through cracks in the plate to form volcanoes. These underwater volcanic cones continue to grow until it reaches the surface of the ocean.

Of course, as the tectonic plate shifts over the stationary hotspot, the volcano begins to shift away from its sustaining hotspot. Then, the process begins again, and a new volcano begins to take form. Over time, a chain of volcanic islands (what is: archipelago) appears. Thus, the conveyor belt theory.

The oldest above-water island in the archipelago, Española, has been so eroded by time and weather that no evidence of the island’s original volcano exists anymore. That being said, evidence supporting Española Island’s role in the hot spot theory has been discovered as some of the rocks on Isla Española are dated around 3.25 million years old, whereas Isabela and Fernandina Islands have rocks dating back to a mere 750,000 years ago.

Most of the volcanoes found throughout the Galápagos are rounded shield volcanoes rather than the more iconic cone-shaped volcanoes. Younger, western islands such as Isabela and Fernandina retain the shallowly sloping shape of shield volcanoes (making them look like overturned soup bowls), though the older volcanoes to the east have eroded more over time and much diminished.

Many of the Galápagos volcanoes are capped with the large cavity of a caldera. The largest caldera throughout the islands can be found on Volcan Sierra Negra on Isabela, and the caldera on Fernandina collapsed in 1968—resulting in a 300 m drop in the caldera floor.

Lava can erupt from fissures and vents throughout the main volcano’s structure as well as from the main crater. The outflow from these fissure eruptions mount and create small cones, known as parasitic cones. There are two types of parasitic cones: tuff cones and spatter cones.

Tuff cones are generally found on the coast, just off the shorelines. They are composed of cemented volcanic ash that explodes from vents when sea water contacts magma. Charles Darwin found Galápagos tuff cones the most interesting, and Darwin was actually the first person who came up with the explanation of how they are formed.

Spatter cones occur when gobbets of lava (de-gassed magma) are flung into the air, where they are cooled and begin to solidify. They fall back down in “splats” and form a small cone. Isla Bartolomé has excellent examples of splatter cones. 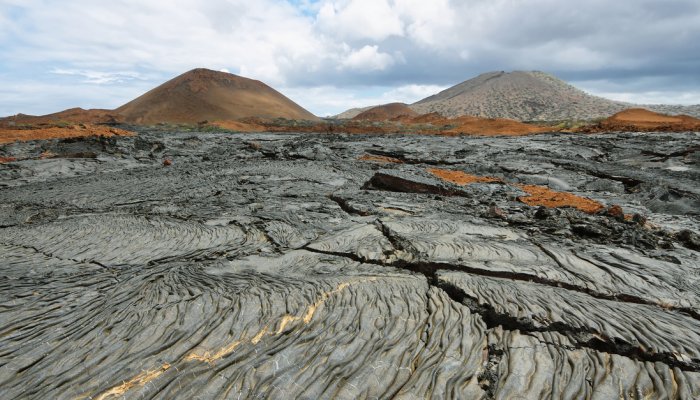 LAVA FLOWS OF THE GALÁPAGOS

The Galápagos Islands volcanic rock is largely made up of basalt. As the islands’ volcanic rock is mostly comprised of basalt, eruptions tend to discharge molten basalt lava rather than explosions of ash and debris. Basaltic magma produces two types of lava flows: a’a (“hurt”) and pahoehoe (“ropy”). The chemical makeup of the two types of lava flows are very similar, but they have remarkably different appearances. A’a lava has a more viscous flow, and the outer skin forms a sharply-edged, jagged surface. Pahoehoe has a smoother, twisted texture often described as “ropy”—thus its Hawaiian name. Hike along a caldera’s rim surrounded by aa and pehoehoe lava flows on our Galápagos Islands Vacation.

The Galápagos Islands tend to have more a’a flows than pahoehoe flows. Fernandina is well known for it’s a’a flow, while Fernandina Island’s Punta Espinosa and Santiago Island are some of the best places to find pahoehoe lava flows. On Santiago, the pahoehoe flows extended from eastern Sullivan Bay to western James Bay, and visitors walking along Sullivan Bay are surrounding by swathes of black lava fields. Meanwhile, visitors visiting Isabela Islands’ Punta Moreno can step out onto a’a lava over 1,000 years old—oxidized and broken over the years. 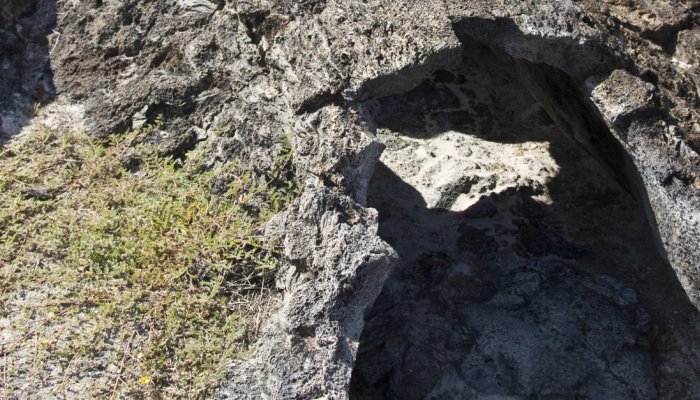 Visitors to the Galápagos often see two other types of volcanic features on their vacation: lava tunnels and pit craters.

Lava Tunnels are formed when the top section of lava cools, forming an insulating crust, and the remaining molent lava continues flowing downslope through the tunnel. When the eruption ends, the drain of molten lava ends as well; this leaves a hollow tube that can extend for kilometers. Lava Tubes can be found in the Santa Cruz Highlands, and another one lies outside of Puerto Ayora. Explore the lava tubes on our Galapagos Islands Cruise. 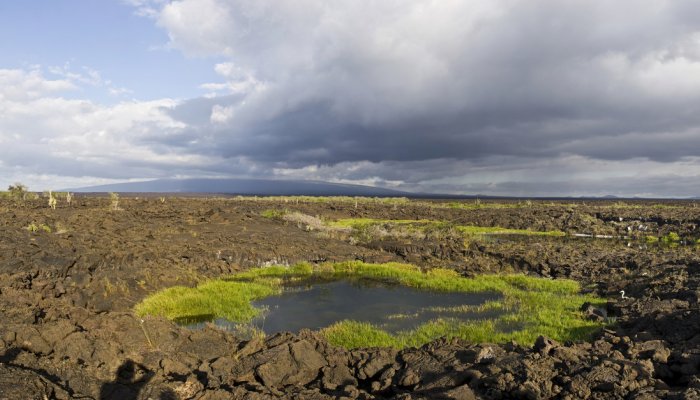 Pit Craters are formed when subterranean magma chambers have emptied, never having erupted. After, the roofs collapse and form giant sink-holes. Los Gemelos, also in the Santa Cruz Highlands, is one of the best examples of a Galápagos pit crater. 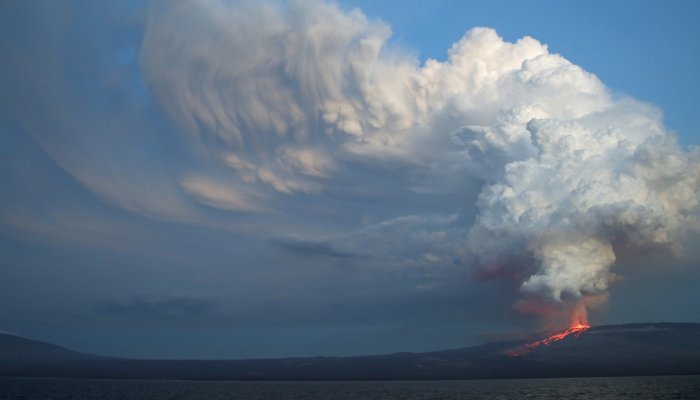 RECENT VOLCANIC ERUPTIONS IN THE GALÁPAGOS

The archipelago has had 60 recorded eruptions since its discovery in 1535, though only 6 volcanoes remain active today. Lively Isabela Isla houses 5 of these volcanoes, with the remaining active volcano found on Fernandina. As Isabela is actually formed from 6 volcanoes that have merged into one another, filling any gaps of Pacific Ocean between them, it has the most potential for volcanic activity throughout the Galápagos.

With the recent eruption of Cerro Azul on Isla Isabela in 2008 and a 2009 eruption on Fernandina, we can see the Galápagos archipelago still has lots of fire in its underbelly.

Volcanic Eruptions in the Galápagos Islands