Visitors used to be able to hike Alcedo Volcano until the late 1990s, when both vegetation and tortoise populations were devastated by the appearance of feral goats.

Kicker Rock, which also goes by León Dormido, is another one of the best snorkeling sites in the Galápagos. Much like Devil’s Crown, Kicker Rock is the eroded remains of a volcanic parasitic cone that rises above the. Unlike the low-level crest of Devil’s crown, however, Kicker Rock is a megalith that rises over 500 feet above the ocean.

From afar, Kicker Rock resembles a sleeping lion (hence it’s Spanish epithet), and there’s a broad, vertical fissure that divides the landmark and creates a narrow channel. Though Tropicbirds, Blue-footed boobies, and frigatebirds enjoy congregating on Kicker Rock’s steep slopes, the real draw is the marine life. Spotted eagle rays, sea turtles, white-tipped reef sharks, the Galápagos shark, and hammerhead sharks are all drawn to the mild currents of the channel.

Underground lava tunnels riddle Santa Cruz, southeast of Santa Rosa. The tubes are more than a kilometer long and easily tall enough for humans to walk through at about 23 feet high. Mineral deposits have created an efflorescence, making the lava tubes appear like a whitewashed subway tunnel. The lava tunnels are lit from within, allowing visitors to see stalactites growing within and the bright eyes of barn owls who inhabit the cool, dark space. Come and join us explore volcanic formations, watch Galápagan wildlife, and more on one of our active tours in Galápagos. 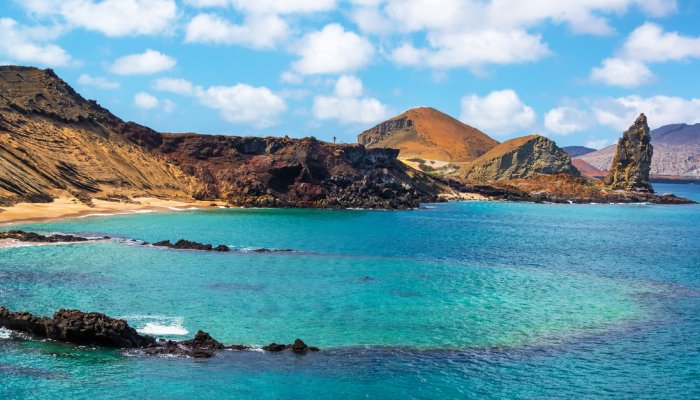 Pinnacle Rock is perhaps the Galápagos’ best known landmark, usually found in the background of the quintessential Galápagos vacation photograph. Pinnacle Rock even had a movie appearance in the film Master and Commander. Pinnacle Rock is actually a tuff cone jutting off the shoreline, though these days the towering monolith of volcanic rock resembles an arrow head.

Though Pinnacle Rock is worth putting on your list “must-see Galápagos sites” for itself, the surrounding wildlife is an added draw. A green sea turtle nesting beach lies adjacent to Pinnacle Rock (with nesting season happening from January to March), and there’s a small breeding colony of Galápagos penguins established in a cave behind Pinnacle Rock. Sea lions, stingrays, spotted eagle rays, white-tipped reef sharks, and black-tipped reef sharks can be seen swimming off the northern and southern beach shorelines. 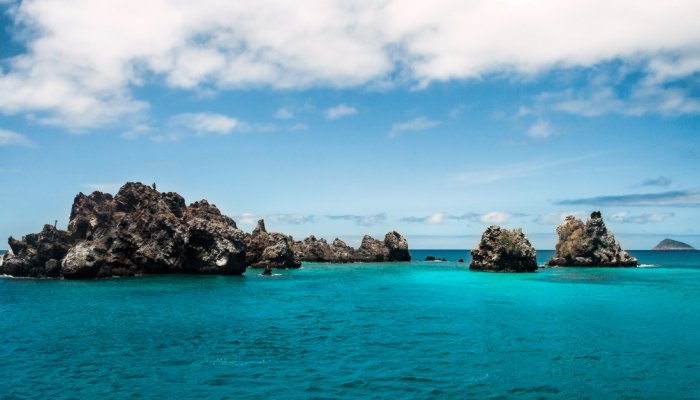 Devil’s crown, a volcanic crater almost completely submerged in the ocean off of Floreana’s northern coast, is one of the best snorkeling sites in the Galápagos. The Devil’s Crown has been so eroded by the constant waves that only the northern and southern rims of the crater can be seen poking out of the water—a coronet of volcanic rock.

A coral reef sits in the middle and attracts a plethora of marine life. Hammerhead sharks congregate around the edges, dolphins streak by, and rays and tropical fish swim beneath the surface. The currents are strong here, the marine life is active, and snorkelers can always find an incredible underwater panorama. 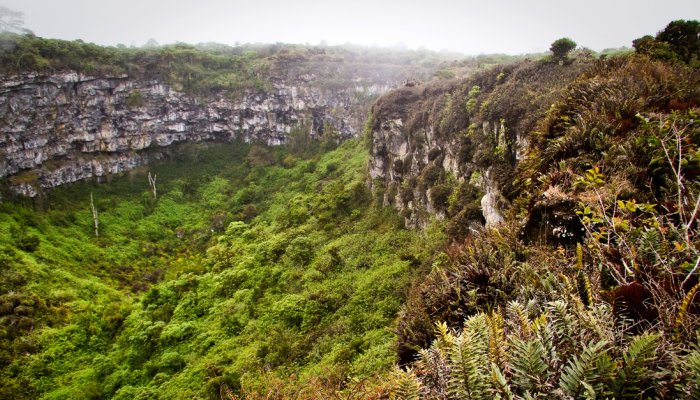 Up in the Santa Cruz highlands visitors can find Los Gemelos—two giant volcanic craters formed from collapsed underground magma chambers. The highlands are more lush than the dry coastlines, and Scalesia forest covers much of the highlands as well as the craters. Trees and epiphytes has engulfed the craters, spilling down over the steep sides.

Visitors can find Los Gemelos off the highway running from Itabaca Channel to Puerto Ayora, which runs between the two craters. 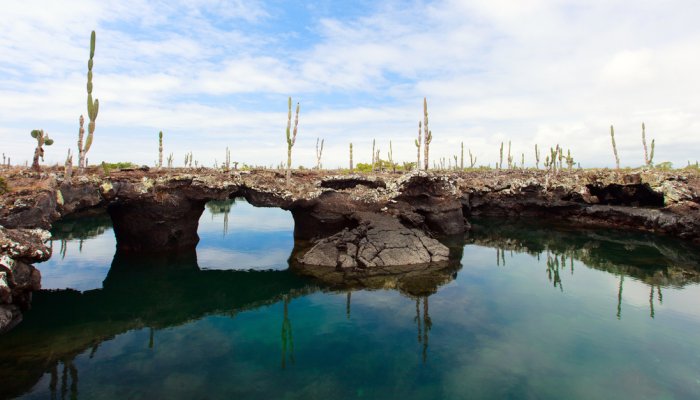 Off Isabela Island lies the geologic formation known as Los Túneles—one of the best snorkeling sites in the Galápagos. Volcanic tunnels are all over the place, creating naturally formed lava bridges, partially submerged arches, and plenty of becalmed hideaways for marine life and seabirds. Many people liken the area to a playground for marine life, who seem to enjoy zooming in and out of the natural labyrinth. 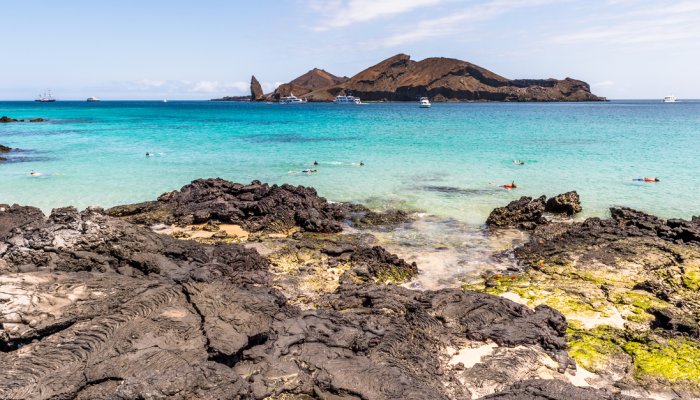 Named after Bartholomew James Sulivan (a lieutenant on Darwin’s vessel, the Beagle), Sulivan Bay lies on the eastern coast of Santiago Island. A trail leads visitors through swathes of pahoehoe lava flows over a century old—a petrified, rumpled land punctuated by hollowed pockets of gas, hornitos, and the remains of the landscape overtaken by lava and heat long ago.