Snorkelers and scuba divers are devoting their full time to floating under the sea in the Galápagos because they know full well that life’s hotter under the water. Around 550 species of fish inhabit the surrounding sea, with about 13.6% of the species being endemic. Surprisingly, there are no native freshwater fish in Galápagos.

With so many tropical fish flitting about throughout the archipelago, it’s practically impossible to choose the most interesting fish, the most exotic fish, or even the most likely fish you could see on your Galápagos journey. So here’s a smattering of Galápagos fish we think hit the trifecta of interesting and exotic and abundant. 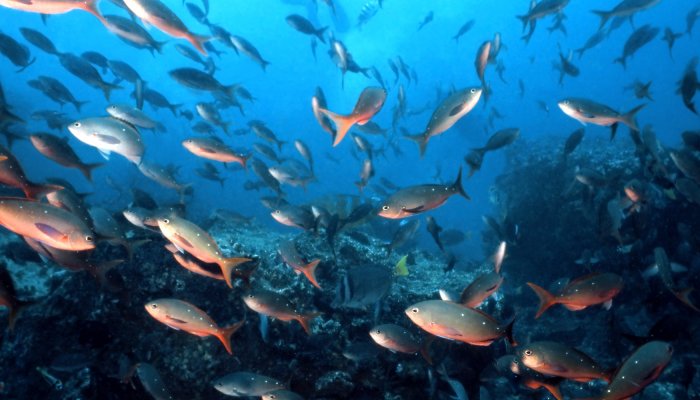 The Pacific Creole Fish is one of the archipelago’s most common fish. The 3-5 distinctive white or dark spots lining its coppery-red back to its forked tail give this commonplace fish its moniker of the Five Spot Anthias. They congregate in large groups to feed on plankton or small fish—becoming easy pickings for awaiting blue-footed boobies. It’s a good thing these fish are so plentiful throughout the islands as they make up a primary part of the blue-footed boobies’ diet. 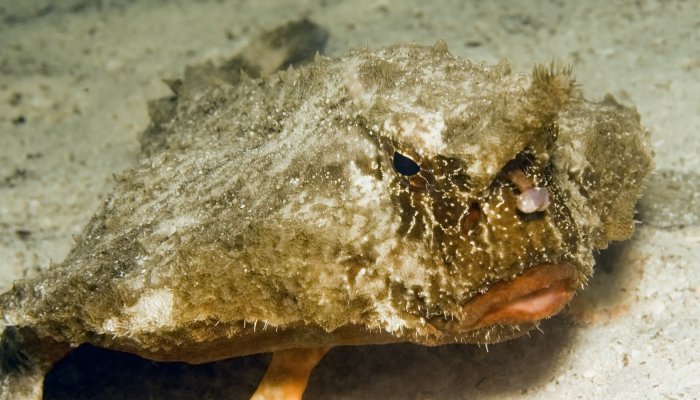 Pucker up! With their bright red lips, the exotic red-lipped batfish always look like they’re wearing lipstick for a night out under the sea. Of course, in an example of nature’s natural gender bending, it’s the males who sport the vividly red lips to attract appreciative females. With the fish’s wide, laterally compressed, and dark bodies also give them the appearance of bats. Paired with bulging eyes and painted, pouting lips, the red-lipped batfish is quite the looker (at least to other fish).

The red-lipped batfish, like many other deep sea fish, are voracious carnivores. They use their adapted dorsal spine that secretes a chemical lure to attract prey such as small fish, crustaceans, and mollusks. In this, they have adapted in ways similar to other anglerfish. Paired with their distinctive looks and swimming habits, they sport impressive adaptations. They definitely live up to their namesake, Darwin, with their scientific name Ogcocepphalus darwini.

FUN FACT:
The red-lipped batfish may be a fish, but swimming definitely isn’t their area of expertise. Although they’re gifted with fins, they don’t get very far using them to paddle through the water. Rather, they take after humans and use their fins as imitation legs to amble across the ocean floor. If the red-lipped batfish aren’t up for an underwater walk, their fins are also adapted to allow them to take a break and “sit” on the sandy bottom of the ocean. 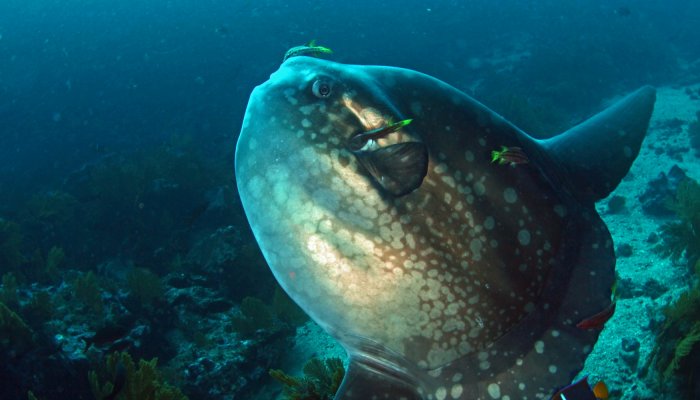 If you’ve ever tried to imagine what a giant swimming head might look like, you might have been imagining a mola mola. With their oddly stunted bodies, mola molas look like an interesting fish that hasn't quite been… finished.

Mola molas are the largest of the world’s bony fish. When mola molas are born, however, they are around the size of a pinhead. They begin to grow quite quickly, though. One specimen in the Monterey Bay Aquarium put on 822 pounds in 15 months, and on average they can measure up to 4.26 meters (14 feet) in height and 3.1 meters (10 feet) in length. The mola molas are not only the largest of the bony fish, but have the most potential for reproduction. Female Mola mola produce around 300 million eggs on average, meaning they produce more eggs than any other vertebrate on the planet.

The mola mola is also a fish that forgot its scales. Instead, they are covered in rubbery, thick skin that can be covered in tubercles and attracts parasites. Once the skin parasites get too pesky, the mola mola will solicit the help of small fish by offering the parasites up as a snack. They have been known to come to the water’s surface to invite birds to the same feast or even breach the water with a jump of 10 feet in hopes that the splash forces the parasites off.

Where to find mola mola:

FUN FACT:
The mola mola would be a dentist’s dream and worst nightmare all rolled into one. Their teeth are fused together to form a beak-like shape, and consequently they can’t fully close their mouths. If you’re looking to catch sight of a fish with lock-jaw and an intimidating “grill,” the mola mola is the one you’re looking for.