It’s believed that marine and land iguanas evolved from a common ancestor that rafted its way to the archipelago from mainland South America. They remain mutually fertile and on South Plaza Island, where their territories overlap, they are known to interbreed. This results in a hybrid iguana that has traits from both (although probably sterile), with male marine iguanas and female land iguanas having the most success. While Galapagos land and marine iguanas are believed to have diverged around 8 to 10 million years ago, the land iguana species are thought to have split around 5.7 million years ago.

The Galapagos land iguanas were not given a glowing review by Charles Darwin who described them as "ugly animals, of a yellowish orange beneath, and of a brownish-red color above: from their low facial angle they have a singularly stupid appearance.” But despite their looks, they play an important role in the dispersal of Galapagos plant species and exhibit a symbiotic relationship with some of the archipelago’s bird species which eat parasites and ticks off the iguanas.

The Galapagos land iguana usually grows to between 3 and 5 foot in length and are predominantly herbivorous, obtaining most of their moisture from prickly pear cactus. But they are also known to supplement their diet occasionally with insects and carrion. They soak up the sun’s warmth by basking in the sun during the day, then retreat to burrows at night to conserve this heat.

Galapagos land iguanas usually live to 50 or 60 years of age, becoming sexually mature at anywhere between 8 and 15 years old. Females will migrate to a sandy area to nest during the breeding season, with their eggs hatching around three or four months later.

Today there are anywhere from 5,000 to 10,000 Galapagos land iguanas, but they were once far more abundant, with the introduction of feral animals like rats and dogs severely reducing the population. The Charles Darwin Research Station has been conducting a captive breeding program to reintroduce Galapagos land iguanas to Baltra Island where they became extinct in the 1950s. It has proved successful, with the iguanas sometimes even spotted on the runway at Baltra Airport as planes come into land! 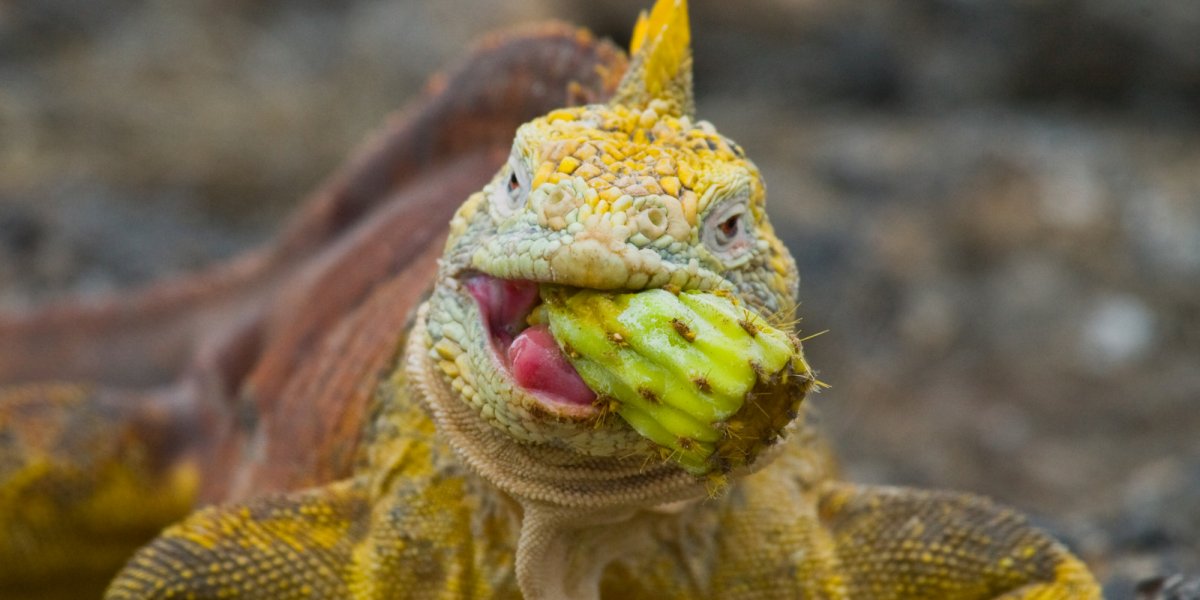