Our feathered friends are so prevalent throughout Ecuador that you need only look up to spot their delightful colors flitting throughout the tree canopy. There’s no need to be a birder to recognize the beauty of Ecuador’s birds, and there’s no need to be diligent in your watching to find them. Indeed, with more then 1,600 bird species found throughout the small country, Ecuador has the world’s highest density of bird species found per acre. In fact, 1,600 different bird species accounts for almost 15% of the species known to exist in the world. With Ecuador’s diverse geography, you can count on finding diverse birdlife wherever you are. 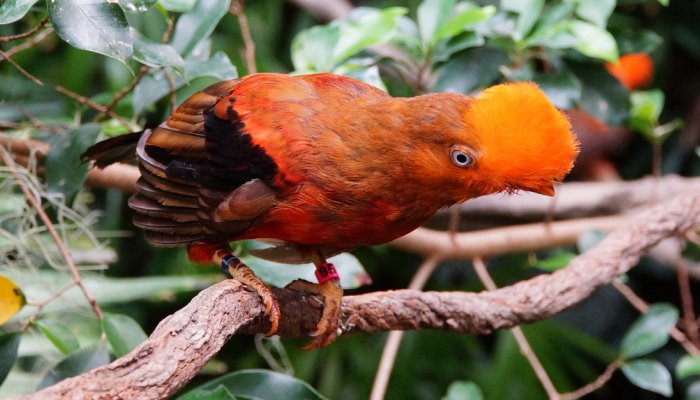 The Andean cock-of-the-rock may be the national bird of Peru, but it’s a common sight among Ecuador’s cloud forests. Male Andean cock-of-the-rocks are fairy easy to spot, even amongst dense plumage, with their vivid orange-red plumage that drapes from their head down to their neck, breast, and shoulders. Their bright upper-half contrasts strikingly with their black underbelly, while gray feathers are usually folded demurely behind them. They also have a distinct crest that forms a rising ring over their beak. While the males are eye-catching creatures, the females are a bit drabber with their brown to orange bodies and slight crest.

Andean cock-of-the-rock males may be excellent at courtship, but they are negligent parents and lovers. After mating, males lack emotional commitment with their females and aren’t concern with bringing home the bacon.

The males gather in large groups in a forested lek, an area where birds gather to perform their displays of courtship. The males then court females by displaying their vivid plumage by bobbing up and down and bowing to females as well as making a sound that most resembles a pig squealing. If the males are lucky enough to find a female’s favor, they do not stick around and instead set off to mate with multiple other females. Once they have done their mating duty, the female is left to build the nest and attend to the chicks by herself.

Scientists speculate that the process of courting and females are so vigorous and costly to the male’s energy reserves that the wooing process is a primary factor as to why the males do not contribute to caring for their progeny. 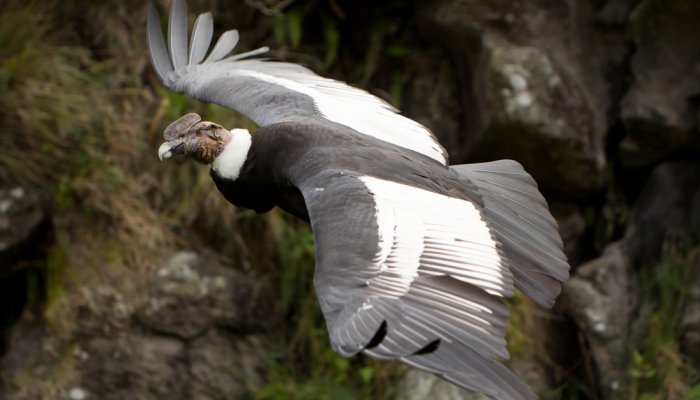 The Andean condor’s majestic and mystical presence has been a part of South American indigenous lore and culture since their beginnings. Representations of Andean condors can be seen in indigenous art dating back to 2500 B.C., and their significance to Andean Cultures can be seen to this day as nations such as Ecuador, Bolivia, Chile, and Colombia have chosen to honor the condor as their national bird.

Their immense wingspan is one of the attributes that makes the condor so noticeable and so noteworthy. Andean condors have the longest wingspan of any raptor, a necessary trait that allows them to lift their heavy bodies into the air. With their hefty weight of up to 33 pounds, even their wingspan of up to 10-feet can struggle to keep them off the ground. For this reason, Andean condors enjoy the windy passages of the Andes or breezy coastal regions where the stronger air currents help sustain their flight.

The Andean condor also holds some distinction as the only New World vulture that features sexual dimorphism, a term that means the condors show a visible difference in physical characteristics and size between males and females. The male Andean condors are larger and they also feature an individualized dark-red comb that crowns their heads. These combs are so distinctive scientists use them to distinguish between multiple birds. However, perhaps their most recognizable feature is the fluffy white ruff that rings their necks.

Andean condors are an endangered species, and their demise is often intentional. Although they suffer from habitat degradation like many animals, they also are deliberately killed by local populations who find them pesky or for long-standing indigenous rituals that require their sacrifice. As an endangered species that only produces one offspring every other year, the Andean condor depends upon breeding programs in captivity to ensure their survival.

Airplane wings are designed to mimic the nature of condor’s wings. The wings of Andean condors are pointed up at the tips, a feature that allows them to soar with reduced drag. Airplane wings share this feature for the same purpose. 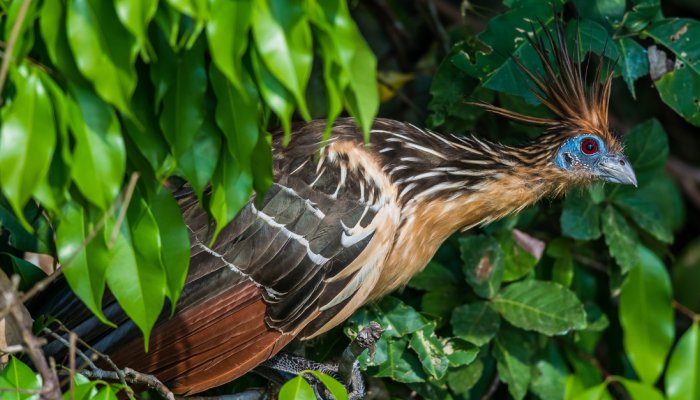 The hoatzin has an unfortunate nickname that isn’t necessarily a term of endearment: the stinkbird. And in truth, this bird is just begging for the pun “fowl smells.” If you are wandering through the stunning terrain of tropical Ecuador and come upon the smell of cow manure, you might be by a hoatzin.

While many members of the animal kingdom might carry a certain stench, the hoatzin come about their incredible smell in a remarkable way. Hoatzin digest their meals by using a form of fermentation that’s common among cows and other ruminants: foregut fermentation. As hoatzins largely feed upon leaves, which can be difficult on the digestive system, they need to use the foregut fermentation system to break down the leaves. These birds definitely do not have to worry about getting their daily dose of fiber. They’re also the only birds around to have adapted to their diet in such a way.

There are drawbacks to their incredibly unique digestive system. With the overly large crop in their gullet, they have a smaller sternum. Ultimately, this means that they have reduced flight muscles. Hoatzins are clumsy flyers when older, but they cannot fly at all when young. In order to evade predators, earthbound as they are, young hoatzins have claws on their wings that they can use to climb along the branches or up trees if they must drop to the ground. These claws drop as they mature.

If you do not recognize a hoatzin by its smell, you can recognize them by their distinctly spiky feathers that crest their heads like a mohawk. Their heads are also bright blue, which stands out in bright contrast to their white and russet colored bodies.

Hoatzins taste as badly as they smell! The good news is that this means they haven’t suffered much from human poaching because they do not make very tasty meals. 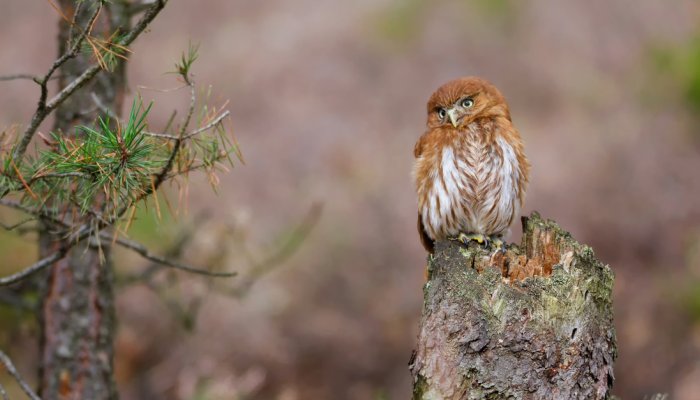 This neotropical pygmy owl enjoys Ecuador’s humid cloud forests and can usually be found on the steeper slopes. With a dark brown body with white spots, the cloud forest pygmy owl is easy to miss or misrecognize. In fact, this pygmy-owl has long been overlooked due to its physical similarity and geographic proximity to the well-known Andean Pygmy-Owl. Its discovery was relatively recent, only in 1999, and it continues to be one of the more overlooked species. 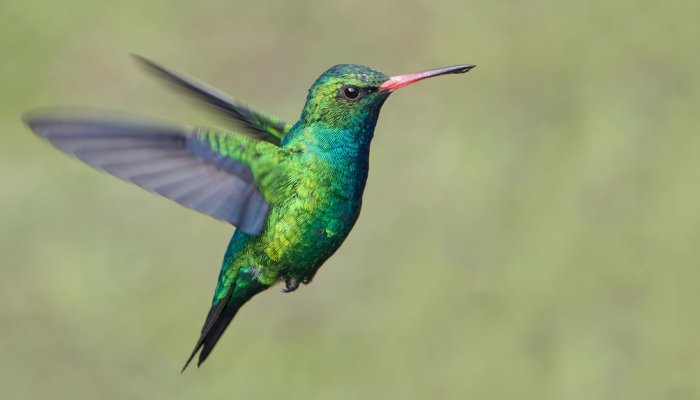 The emerald-bellied woodnymph also goes by the name of the citado wood nymph, and they are a South American hummingbird whose luxuriously green feathers live up to its whimsical name. With their violet-blue plumage dotting their shoulders, they can have the look of a peacock. These hummingbirds can be found in the lowlands of Ecuador if you are quick enough to see one flying by. As solitary creatures, you will only find them in larger groups during mating season. As both men and females appear to have multiple ‘conquests’ during this time, you can sometimes find them in larger groups. 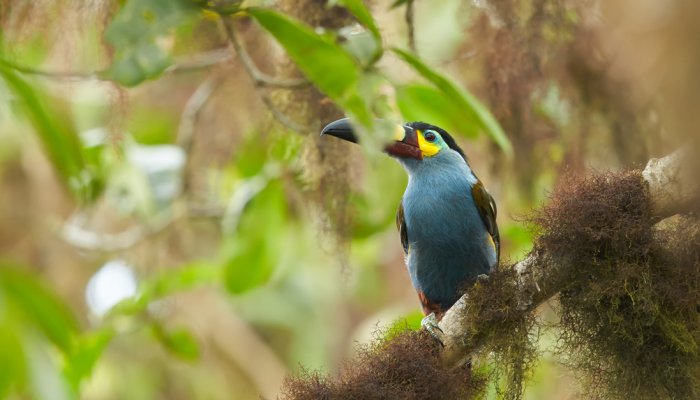 The Plate-billed Mountain-toucan is one of Ecuador’s more spectacular sights, although you might also hear them called Laminated Hill-Toucans or Laminated Mountain-Toucans. They can be found in the western slopes of the Andes running through northwestern Ecuador or Southwestern Colombia. In particular, they inhabit regions with humid montane forests where mosses, cecropia, and bromeliads grow in abundance.

These toucans are incredibly distinguished looking with their bill along measuring 3-4 inches. Though their red, white, and black bill is relatively large, it does not weigh much. If their bills do not catch your eye, you will most likely be drawn to the vibrant blue plumage that colors their underbelly, dotted with yellow on each side. Indeed, they are a collage of color with their brown and red plumage lining their thighs and their olive and black upper plumage and crown. If you see one flying away from you, you will even recognize it by its bright lemon yellow rump.

Unlike some birds, Plate-billed Mountain-toucans form monogamous mating relationships and enjoy roosting in families or small groups. The males woo their partners by feeding them fruit, which must be a bonding interaction as later they forage for fruit together. 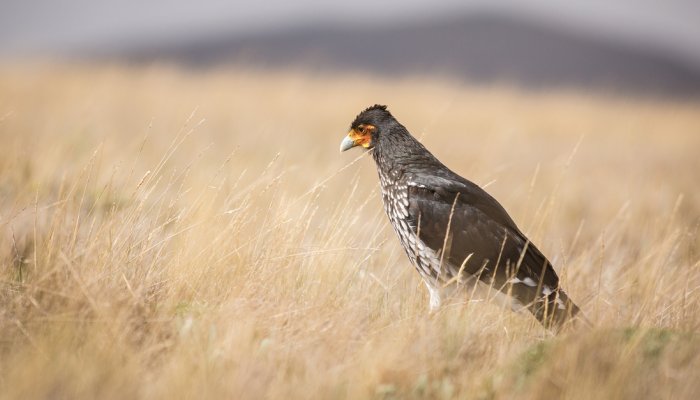 There are many mountain caracara species throughout South America, but the carunculated caracara is the only caracara found at the high elevations of Ecuador’s Andean páramo. These birds of prey are more often seen on the ground than taken in flight as they spend much of their time foraging for carrion and other small animals. With sleek black feathers glossing their head, neck, and upper areas and their white speckled chests, they look like rather drab creatures excepting their bright orange-red to deep red bare skin that covers their face and throat.

While carunculated caracaras often forage in groups of 7-8 family members, they are attracted to herds of cattle. When herds of cattle graze in grassy pastures, up to 40 of these opportunistic birds can be found in their wake.