Although Ecuador plays hosts to many amphibians, the country also wrestles with high extinction and endangerment rates. Ecuador has the third largest number of threatened amphibian species in the world, and scientists estimate that while 14 species of frogs may already be extinct, around 150 are at risk of extinction. That being said, while amphibians and their habitats are at risk, their prospects are not unfailingly dreary. The parish of Mindo, lying within Ecuador’s Pichincha Province, may only be 268 square kilometers but hosts a wide array of around 102 species of amphibians and reptiles. Truly, the Mindo boasts of some of the world’s most bountiful herpetofauna.

This incredible shape-changing frog was only recently discovered as a new species in 2006 in Ecuador’s nature preserve Reserva Las Gralarias which lies along the equator on the Andes’ western slope. The couple that originally discovered the frog nicknamed it the “punk rocker frog” due to its thorn-like spines that ridge the marble-sized frog’s spine. However, it took over three years for the same couple to discover the frog’s other unique trick—its ability to shape-shift. The frog is able to alter its bumpy, tubercular skin so that it becomes practically smooth. Similarly, it can alter the lines of its body to be better camouflaged in its often-mossy environment.

The mutable rain frog remains the first shape-shifting amphibian ever to be discovered. Its shape-shifting capabilities were first reported in March 2015. The discovery bolstered efforts to conserve the Ecuadorian Andes as a biodiversity hotspot as well as reify the importance of amphibian habitats.

This multicolored rainfrog could not be confused with any other of Ecuador’s many amphibians with its distinctive snout. While this frog has several protuberances sprout from the ridges above their eyes and along their body, they all have a distinct tubercle placed at the tip of their nose so that it resembles a lengthy snout. This feature is unique amongst Mindoan frogs. The Pinocchio rainfrog can only be found in the primary forest of Chocó, and is endemic to the region.

The Rio Pescado stubfoot toad is also known as the Harlequin Toad, and it enjoys the subtropical and tropical lowland rivers and forests of Ecuador. Thought to have been extinct due to the spreading of the chytrid fungus for over 15 years, these critically endangered frogs were rediscovered in 2010 due to a “Search for Lost Frogs” campaign. Hopefully, their reappearance will serve as hope for further proliferation in the future with the help of further conservation efforts. If you happen to see these rare creatures, you can recognize them by their green or yellow bodies speckled all over with black spots. 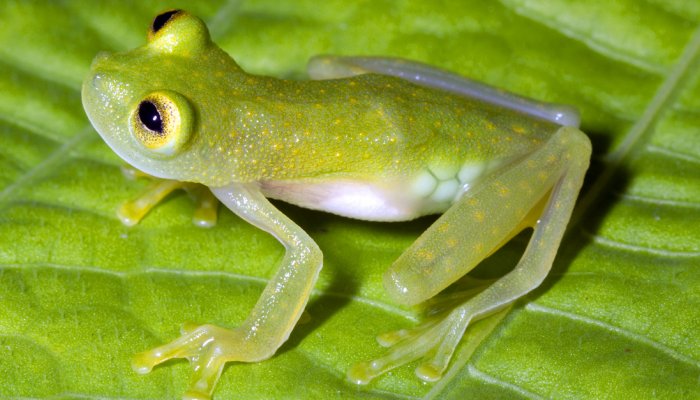 Glass frogs receive their name from their spectacularly transparent skin. If looked at from below, one can see their internal organs and pumping blood in stunning relief. The Las Gralarias glass frog is singular amongst other Mindoan frogs in that it is uniformly green along its upper back and sides, has a very truncated, short snout, no webbing between their fingers, and no spines lining their back. 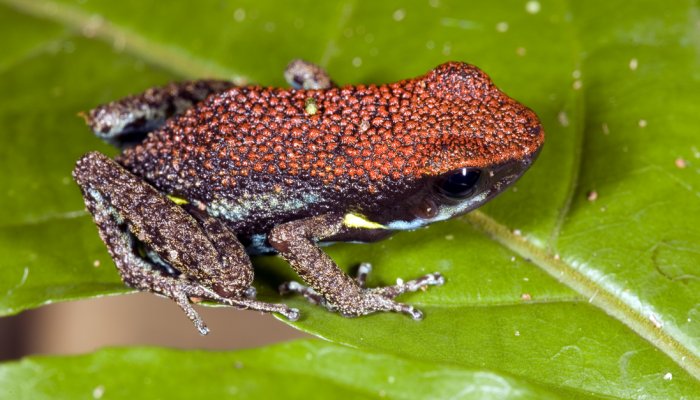 Of the 170 poison-dart frogs known to exist throughout the world, Ecuador hosts 55 unique species with many of them being endemic to Ecuador. Poison dart frogs are vibrantly colored, striped, spotted, marbled, and rainbowed. Though they are entrancing to the eye, their pigmentation is actually a warning—nature’s very own way of saying “touch me not.” Although sometimes bright colors can be a bluff among animals, poison frogs are brutally honest and recent studies have shown a correlation between those frogs sporting the brightest colors and their skin toxicity.

The Ecuadorian poison frog can also be found in Peru and Colombia despite its territorial name. It prefers the tropical and subtropical lowlands with their moist forests, rivers, and freshwater marshes. With its black-speckled bright red back, intermittent splashes of yellow, and marbled blue underbelly, the Ecuadorian poison dart frog reveals itself as a poisonous threat to its predators.

Poison dart frogs got their name in a very literal fashion as they were used to poison the darts of the indigenous people throughout South America. The practice did not decline until the 1970s, and there remains speculation that the Embera people continue to use the practice. The decline means that poison dart frogs are no longer being hunted for their poison, but they continue to face the same threats to their habitats as other amphibians. Furthermore, they face the new interest of scientists who seek to use the chemical compounds in their skin for pharmaceutical purposes. Some of the compounds are used in pain killers.